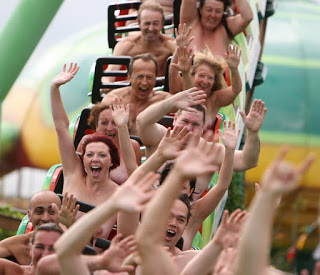 There is nothing I love more than a good, old-fashioned roller coaster. When I’m at an amusement park, you cannot keep me away.

Of course, I usually ride with my clothes on, but when in Rome…

A group of people rode naked on a rollercoaster in England Sunday to try to break a record. They fell short, but still attracted plenty of attention and raised more than $15,000 for charity.

Fifty-seven uninhibited amusement-park patrons hopped aboard Adventure Island’s Green Scream ride in Southend-on-Sea. While their flesh was willing, participation was relatively weak. The existing Guinness World Record dates back to 2010 when 102 people rode the same ride.

It is my sincere hope the seats were burned after the world record attempt concluded.

Have something you want to say? A tip, suggestion, compliment, complaint, or pictures of Vica Kerekes? Send them to “philly_lawman (AT) yahoo (DOT) com.”